Yesterday, October 13th, was the World sight day, a day reserved to remind the forgetful beings that we are of how important eyesight is. Raising awareness on blindness and vision impairment is of great importance to me, since I have been struggling with eye sight impairment for years. And now that everything’s ok, knock on wood, I decided to join the celebration of this day. Since I don’t have the resources, nor the venue to be throwing book readings for the blind, or donate a suitable sum of money, I decided a convenient way of honoring this day would be me preparing some carrot pancakes and get a few friends over. 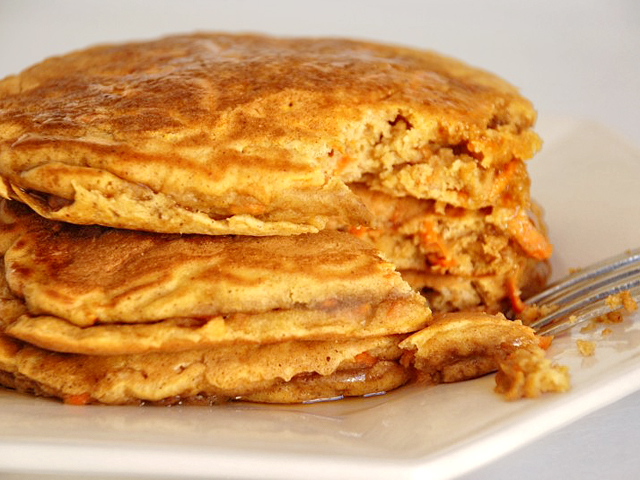 We all know that carrots abound with beta carotene, which can help people with eyesight problems. So carrot pancakes are a pretty affordable way of celebrating this day. I found a vast number of carrot pancake recipes on a site called MyGreatRecipes. I rolled my sleeves up and started cooking some pancakes. Since all of my friends are crazy about carrot cake, I decided to start our afternoon out with the Carrot Cake Pancakes. With a texture so soft and tender, these pancakes turned out to be real crowd pleasers. But what I think made them a true hit with my friends wasn’t only the carrot-cake flavor but a secret ingredient I used: cinnamon. My kitchen smelled heavenly long after I’d finished them.

Pancakes for Your Vegan Friends 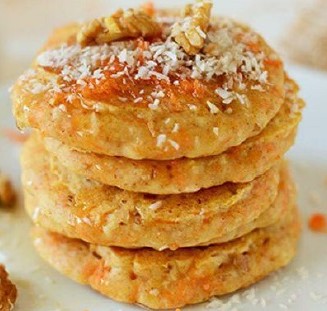 Before going on to the next recipe, you must know that almost half of my friends are vegans. Really, I don’t know if it’s their constant talk about eating healthy and being protective of animals that got me into liking them, or their individual traits, but either way I am stuck with them for pretty much a lifetimeJ. So, I guess by now you’ve guessed it, the next recipe is all vegan. The Vegan Carrot Coconut Pancakes, light and tasty, drizzled with maple syrup, low in sugar and high in beta carotene turned out to be very much liked by both my vegan and non-vegan friends. Seriously, everyone was just grabbing them, and in the end it turned out the 50 pancakes I made weren’t enough.

Pancakes Can Help You Raise Money

Luckily I had one more variety of carrot pancakes, and it also included cinnamon. Now what can I do, I just love cinnamon and its aroma! The Cinnamon Apple Carrot Pancakes were the best pancakes of the evening, at least to me. Tender and orange in color, plus drowned in maple syrup, these were as pleasant to watch as they were to eat.

All in all, it was a great afternoon, we all said our thankyous for being alive and have no eyesight problems (anymore) and after we had our pancakes, everyone decided to donate as much money as we had on us and then give them to a charity concerned with the issue.