In this article, we are going to explore minoxidil as a treatment for hair loss and explain how, after approximately five (5) years of research, Hair Restoration Laboratories has developed the most powerful and effective minoxidil-based product available–the Ultra Strength Hair Regrowth Treatment.

How Does Minoxidil Work?

While the FDA has approved minoxidil as a hair loss treatment, the medical community is not in agreement as to how it exactly stimulates hair regrowth.

Some theorize that minoxidil promotes blood flow to hair follicles and increases both the size of the follicles and the diameter of the hair shaft. This stimulates hair growth and prolongs that growth.  Follicles that had, over time, shrunk and producing finer hairs should then become larger and subsequently produce thicker hair. 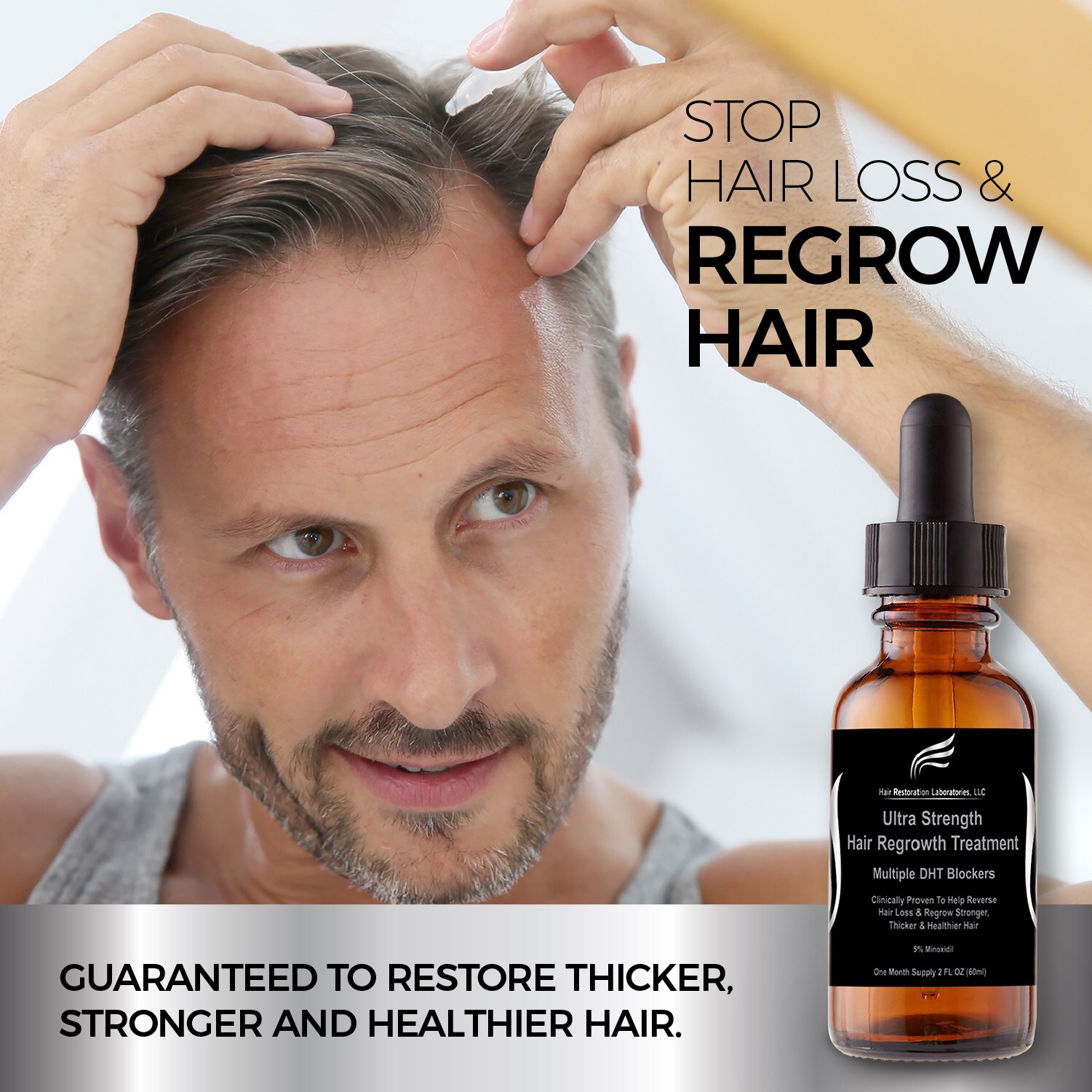 Who Can Use Minoxidil?

During initial clinical testing, minoxidil was only tested on males.  Once approved, it was initially offered only as a 2% minoxidil formulation for males.  And, because the subjects only used it in the crown of the scalp, it has only ever been approved to help regrow hair in that area–and not along the hairline or the center of the scalp.  Minoxidil was subsequently approved to be used at a 5% concentration, for both men and women.

Minoxidil is only recommended for men and women with genetic or “pattern” hair loss, and not hair loss caused by any other source, such as stress, medication, childbirth, etc.

What To Expect When Using Minoxidil?

Unfortunately, it is well-settled that standard minoxidil is quite limited in its effectiveness.  For many experiencing genetic hair loss, it will not provide any benefit, particularly if the hair loss is advanced.  Additionally, as a result of certain chemicals in standard minoxidil, side effects can be pronounced when using it.

At the inception of treatment, users can experience a slight increase in hair loss (also referred to as the “shedding period”).   This is caused by the minoxidil triggering a new growth cycle in which existing, older hairs are shed to make way for the hopefully new and thicker hair growth.  This shedding period should only last a few weeks.

Between 3 to 6 months of use, fine, colorless and very soft hairs may begin to emerge.  The new hair should begin to thicken and strengthen somewhat, although it may be a little different in color and texture in comparison to the rest of your hair.  If regrowth occurs, you will need to keep using the minoxidil, as minoxidil is not a permanent fix or hair loss “cure”. It works only as long as it continues to be used.

If you decide to use standard minoxidil, you must have realistic expectations.  There are a number of ways your hair may respond: either you will grow a little back, not regrow hair but maintain the hair you have left, or see no results at all. On average, only about 33% of users of standard minoxidil report moderate hair regrowth. Unfortunately, the most common response people experience with minoxidil is slight regrowth, no regrowth and/or slowing further loss.

Another common question people have about standard minoxidil is whether it can help with a receding hair line. Unfortunately, there is no clinical evidence that standard minoxidil can regrow hair in the front of the hairline.  Rather, at the time of its FDA approval, it was only proven to be of benefit. 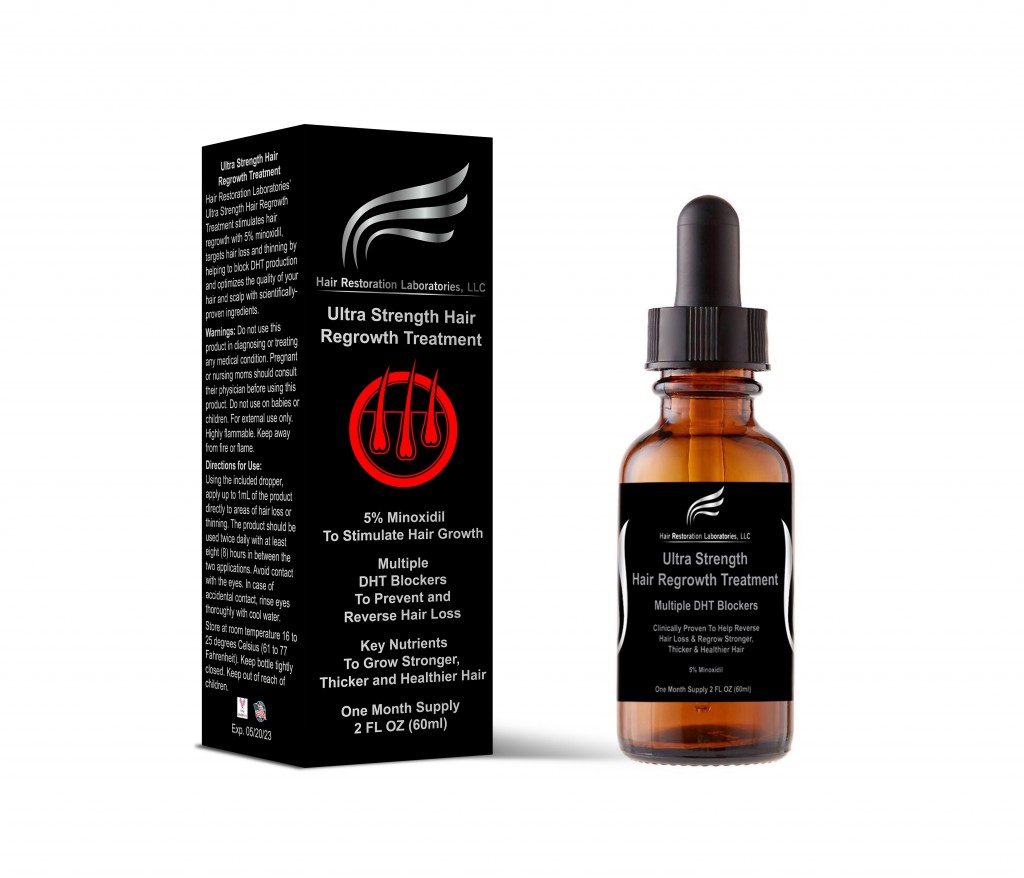 The Real Problem With Regular Minoxidil–It Does Not Address The Actual Cause of Hair Loss-DHT!

While minoxidil may prolong the anagen phase of your existing hairs and help regrow some of the lost hairs, the new hairs will be most likely be thin and weak.  Minoxidil does not do anything to stop hair loss as it does not address or counter the actual cause of genetic hair loss-Dihydrotesterone (“DHT”).  Even if you use minoxidil religiously, eventually, your hair follicles (without a DHT blocker), will become overwhelmed by DHT, leading to hair miniaturization. To properly stop and reverse hair loss, you must block DHT.

Unfortunately, DHT causes havoc for hair follicles. It connects to them and triggers a process called “miniaturization”.

As the hair follicles become miniaturized, they will grow in thinner and thinner. Eventually, the hair becomes so thin and weak that, once it falls out, it simply does not regrow again.

Thinning hair and hair loss can be caused by a variety of internal and external factors.  However, the most common cause of male and female pattern baldness is genetics. And while the cause of genetic hair loss has been the subject of debate for many centuries, today, the medical community is in agreement that it is caused by DHT.

While DHT is necessary during the early stages of life, as we age, it is of no known benefit to adults. Unfortunately, once formed, DHT causes havoc for hair follicles.  It connects to the androgen receptors at the base of the hair follicles.  This then leads to a process called “miniaturization”.

Anagen is the growth phase. Hairs remain in this phase for 3 to 6 years. The longer it lasts, the longer the hair grows. Normally, around 80 to 85% of the hairs on the head are in this phase.

Catagen lasts approximately 2 weeks. It allows the hair follicle to renew itself.

Telogen is the resting phase. The follicle lies dormant for 5 to 6 weeks. Normally between 12 and 20% of hairs are in this phase.

After the telogen phase, the anagen phase begins again. The existing hair is pushed out of the pore by the new growth and naturally sheds.

As the hair follicles become miniaturized, however, hair that grows in during the anagen phase, will grow in thinner and thinner.  Eventually, the hair becomes so thin and weak that, once it falls out, it simply does not regrow again.

In order for men and women to prevent and reverse hair loss, DHT in the hair follicle must be blocked.

In order for men and women to prevent and reverse hair loss, Hair Restoration Laboratories has combined FDA